The last time we saw her

Tanya
I'm a highly sarcastic, often cynical, 30 something mommy of a 7yr old boy and wife to a full time student, trying to get into the nursing program. *sigh* I need a break.

Blasts from the Past

Recently I took it upon myself to find two people from my past, that I think about often. The mom of a girl I use to babysit for and my 6th grade teacher. I emailed them both. I haven't heard from the mom, but my teacher emailed me back in less then 10 minutes.
I was so happy to hear back from her. So excited that I honestly just wanted to cry.
This was someone who helped shape my life. Someone I think about often and hope she is doing well. Someone who made 6th-12th grade, and my parents divorce a little less painful. Someone who I would love to sit down with and tell my entire life to.

Oddly enough she was a teacher who most students disliked as she was extremely strict, to the point that she wouldn't even let her students wear makeup. I remember she let me bring my Cabbage Patch Kid with me to 6th grade camp, even though it was frowned upon. In taking me under her wing she did things that would be soooo frowned upon now. Like making me make a promise to not...before I was 18. Or inviting me into her family life where I spent a weekend with her and her family (after the school year ended). Things were just different then. She asked me difficult questions that I hated her for and then years later went to see her to apologize because I understood why.

I'm so so glad she is well and that she has become a principal like she wanted. I really doubt that she truly knows how much her mentoring and friendship meant to me.

Contact a teacher that made a difference in your life. It will make you feel good, and most likely make their day.

Thanks to daycare, after going to the store today J held up the plastic bag and said to me "this is bad for da earf."

Yes sweetie, I know that. Now just remind me to bring my reusable bags.

Wow it seems like there have been a lot of birthdays this weekend. My bosses was Sunday but we celebrated it here at work on Thursday. I got to make a gluten free, organic chocolate cake...from a box. It didn't smell very good, and J did not want to lick the bowl, but after it was cooked and frosted it was actually okay. Thursday was also my dad's birthday and Friday was my grandma's and R's (who's the only one that really matters in this story).

Friday I left work at 10. I never do that so it was a huge shock for R. I wanted to take him down to San Diego for lunch and a trip through the Body World exhibit but with the drizzly weather and the roll over accident next to our house we thought it would be best to just stay in. Not to mention daycare probably would be less then ecstatic if we ran late on Good Friday. Heck we had originally planned to go to Disneyland, free birthday and all, but that plan was foiled when we realized it was Easter weekend.
Thursday I had made R's chocolate cake. A deliciously sinful, full sugar, full gluten cake with sour cream frosting. Staying in on Friday gave me a chance to whip up some butter cream icing and decorate the cake. He wanted me to make roses, so I could practice, but with only a half hour to pick up, there just wasn't time. I grabbed the boy, the cake and off we went to pizza with his family. Where R and his brother got in an argument on the state of our economy. Why or why? It's so interesting to see how different two people form the same family can be, especially since they are only a couple years apart. Despite that bit of tension it was a really relaxing dinner, for me at least. 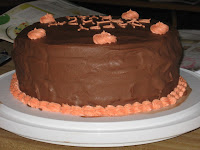 On Saturday we didn't do much in the morning and headed over to a carnival for about an hour in the evening. J rode one ride and was done. Thankfully he had a blast playing games and even got three ping pong balls in the little floating cups. Since I had purchased tickets for two rides I just had to use the rest of the tickets myself. Unfortunately the carnival was pretty ghetto and the only ride that looked safe was the Tilt-a-whirl. It was fun the first few times around but then it got pretty monotonous. By the time I got off I felt sick and my arm hurt, very strange. Guess I'm getting old. blah. 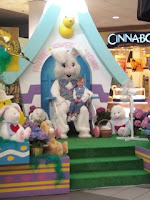 Sunday was a really great Easter! Other then trying to make it down to brunch, where my uncle works, in time for the egg hunt, there was no stress. It was nice. When we got home it was nap time. I guess the sun wore me out because I ended up falling asleep in J's bed. When he woke grandma came over and we dyed eggs. I think the adults had much more fun then J, as he lost interest after about 10min. 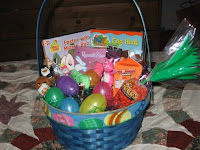 Sometimes random memories pop into my head. Today it was one about Pumpkin Cheesecake. When I was TTC I had heard that if you eat Pumpkin Cheesecake it will help you get pregnant. This knowledge called for us to go to the nearest Cheesecake Factory, about 40 miles, and buy a whole pumpkin cheesecake.

Liars! But it tasted good anyhow.

I had the rest of that cheesecake in the freezer for who knows how long.